Breaking news on the transport strike 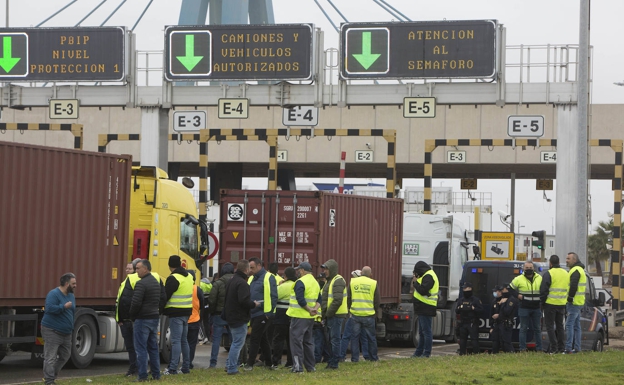 Today is a crucial day to elucidate the conflict that for just a week, as we have already informed you, thousands of carriers have been protesting against the spectacular rise in fuel prices. According to sources consulted by Grupo Raminatrans, the majority associations of carriers, who have so far opposed the strike called by the Platform for the Defense of the Freight Transport Sector, are going to give the Government an ultimatum: either approve direct subsidies imminently to the price of diesel for truck drivers or they will give freedom to their associates to join the strikes, even if as an organization they do not subscribe the strike.

These associations will take advantage of the meeting held today by the National Road Transport Committee (CNTC), the representative body of the sector that brings together most of them, but in which the Platform is not represented, with the ministers of Economy, Treasury and Transport to raise the demand that subsidies and direct aid to carriers be approved this week, such as those that have just been decreed in France and Portugal, according to sources in the sector to different media.

The majority associations of carriers want the agreement reached on March 18 between the French Government and carriers to be replicated in Spain, which will be discounted at gas stations with 15 cents per liter for diesel during the next four months. Likewise, this agreement contemplates a public aid item of 400 million euros that will be distributed to each carrier, both goods and passengers, depending on the vehicles they own and the load capacity of each one of them, from 300 euros for each van to 1,300 euros for each heavy duty truck.

The CNTC is the only interlocutor that the Government has recognized as valid since the beginning of the conflict last Monday, March 14. In it, the carrier associations are integrated according to their representation: the Spanish Confederation of Freight Transport (CETM) has 63.9% of the votes; the National Federation of Transport Associations of Spain (Fenadismer), with 21.5%; the International Road Transport Association (Astic), with 10.5%; the Business Organization of Logistics and Transportation (UNO), with 6.8% and the rest is distributed by half a dozen associations. The Transport Platform, born in 2007 from the union of small companies and the self-employed, is not integrated into the CNTC, considering that it does not represent the sector, because only the associations of the large transporters are included in it, “with companies that do not have not even a truck and they subcontract all the transport to take the commissions”, in the words of the president of the Platform, Manuel Hernández.

With this scenario, which it is even difficult for us to understand, we cannot guarantee the usual quality of our transport services, far from it, when we have tried we have suffered the consequences of the pickets, since this strike is having an intermittent impact and in a different way in each province, in every type of traffic (canvas truck, refrigerator truck…) but it is having a very significant effect on container traffic and loads produced from our warehouses in Valencia and Madrid, due to the slow gears strategically placed at roundabouts to access industrial estates and logistics points such as ports.

We will inform you of the evolution of the strike, always from our desire to be able to work normally and providing our services with the quality that we have been providing to date.